Mao Zedong, the founder of the Communist People's Republic of China, was responsible for the deaths of some 45 million Chinese, most of whom starved to death as a result of Mao's farm collectivization and industrialization policies, known as the “great leap forward”. Chairman Mao first instituted a reign of terror on the Chinese people soon after the Chinese Communist Party won the civil war with the Chinese nationalists in 1949. Between 1949 - 1953 He murdered, imprisoned and tortured millions of Chinese as the CCP asserted its dominance all over mainland China. However even these horrendous crimes would pale in comparison at what he would unleash on the Chinese people in 1958 - 1961, the years of the "great leap forward".

Mao aimed to rapidly transform the China from an agrarian economy into a Communist modern society through rapid industrialization and collectivization, and he meant to do it at all costs, and regradless of human suffering. The program for the "great leap forward" included the introduction of mandatory agricultural collectivization which turned the traditional Chinese family and village farms into giant state owned farm collectives. Private farming was prohibited, and those engaged in it were persecuted and labeled counter-revolutionaries. Many farmers were also uprooted from their lands and sent to work as forced laborers in the cities and industrial areas. This caused massive disruption in the countryside and caused harvests to be reduced, despite favorable weather conditions. However, although the actual harvests were reduced, local officials, under tremendous pressure from central authorities to report record harvests in response to the innovations, competed with each other to announce increasingly exaggerated results. These were used as a basis for determining the amount of grain to be taken by the State to supply the towns and cities, and to export. This left barely enough for the peasants, and in many areas, widespread famine and starvation set in. Mao and the Chinese Communist party were well aware of the famine that was developing in the countryside, a famine they helped to bring about, but instead of stopping it, Mao choose to exacerbate it. During a secret meeting in Shanghai in 1959, Mao stated that "To distribute resources evenly will only ruin the Great Leap Forward. When there is not enough to eat, people starve to death. It is better to let half the people die so that others can eat their fill." Even at the height of the Mao made famine, some 22 million tons of grain were held in public granaries, but Mao preferred to sell them to the USSR instead of using them to alleviate the hunger and help his starving people. The disastrous agricultural policies of the Great Leap Forward and the associated famine continued until January 1961, when the Communist party decided on the the restoration of traditional agricultural production through a reversal of the Great Leap forward policies. Grain exports were also stopped, and imports from Canada and Australia helped to reduce the impact of the food shortages, at least in the coastal cities. Historian Frank Dikötter, the only western author to have delved into the Chinese archives since they were reopened four years ago, asserts that "coercion, terror, and systematic violence were the foundation of the Great Leap Forward" and it "motivated one of the most deadly mass killings of human history". However, not all deaths during the Great Leap were from starvation. Dikötter estimates that at least 2.5 million people were beaten or tortured to death and 1 to 3 million committed suicide. However, Mao was not done with murdering Chinese people, millions more would be imprisoned, tortured and murdered when Mao launched his "cultural revolution" in 1966. 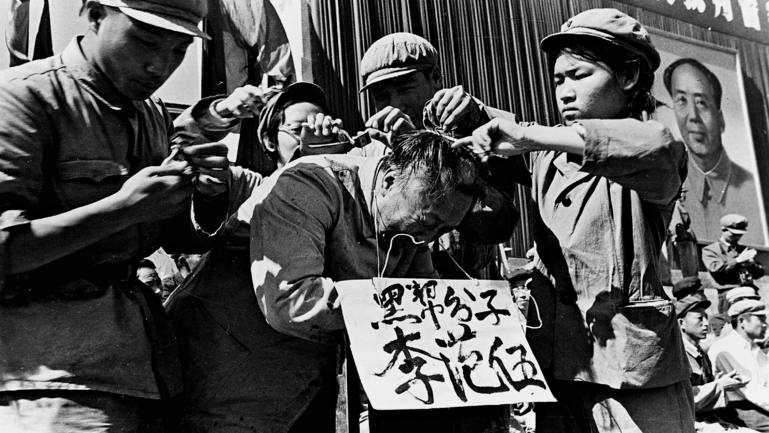 Members of the Red Guard cut the hair of an official during the Cultural Revolution. The goal of this "cultural revolution" was to preserve “true” Communist ideology in the country by purging remnants of capitalist and traditional elements from Chinese society, and to re-impose Maoist thought as the dominant ideology within the Party, and throughout Communist China. Mao Zedong called on the masses to "struggle" against and "crush" the people in authority taking the country down the capitalist road. Unleashing the country's youth against established figures and historic relics, Mao succeeded in regaining absolute power over the CCP, but ended up paralyzing China until the movement ended in 1976. Mao encouraged the young to spy on and denounce their own parents, which they happily did, which resulted in their parents being sent to a hard labor camp or in a summary execution. It is estimated that millions were murdered during the time of the cultural revolution, but the true figure of those who were persecuted or died during the Cultural Revolution however may never be known, since many deaths went unreported or were actively covered up by the Communist police and local authorities.

A former "red guard" member talks about the horrors of the cultural revolution.

The official statistics for Mao's crimes is 20 million deaths, as given by a top ranking Communist party official Hu Yaobang. Yang Jisheng, a former Xinhua News Agency reporter who had privileged access and connections available to no other scholars, estimates a death toll of 36 million. Frank Dikötter estimates that there were at least 45 million premature deaths attributable to the Great Leap Forward from 1958 to 1962. Various other sources have put the figure at between 20 and 46 million. To this day the cult of Mao is very much alive in Communist China, where his crimes remain either hidden or minimised and the official state propaganda venerates him as the "founding father of Communist China".

Despite all of the historical facts availble today about the crimes and horrors of Mao, in the west the media, journalists, intellectuals, politicians, and prominent public figures still consider him a "great leader", and they celebrate him and his Communist revolution's "achievements" in China openly and publicly.